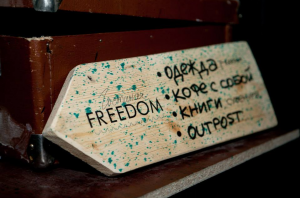 “QueerFest”, the queer pride event of Russia, opened in St. Petersburg with a bang. Over 160 people made it, despite the last minute change of venues, attacks by provocateurs, and insults by the usual guest – Vitaly Milonov.

Last week, the organizers learned of the planned actions to foil the event by infamous homophobic activists, some of them, such as “Enteo” and co., coming especially for the festival from Moscow.

The police and the ombudsman for human rights of St. Petersburg were alerted.

1,5 hours before the festival was scheduled to open, the owner of the building (same building that hosts “Manifesta 10” biennale headquarters) informed us through his representative that our contract was annulled. Reason given “compromised integrity of the arch over the entrance of the building, which may result in its collapse”. Needless to say, this public threat did not impede all other events in the building to proceed as planned.

Volunteers of the festival moved the exhibition and equipment to a new venue in under 1 hour.

The ceremony was a success. While QueerFest’s security barricaded the door from Vitaly Milonov and his friends, who proceeded to insult and push guests, representatives of human rights organizations and European and the US diplomatic missions in St. Petersburg spoke of the importance of respect for human rights and non-violence.

About 20 hooligans sprayed guests with green substance and some sort of putrid gas. At one point, two foreign guests were being pulled into the venue by the security while being pulled out by their feet by the perpetrators.

The police, who carried themselves professionally, were taking numerous statements by the victims, while St. Petersburg ombudsman urged more people to document violations.

Unfortunately, the second venue also ceded to pressures, and most events are now homeless. But the organizers remain optimistic.

“We feel exhausted and exhilarated. Thanks to the work of 40 volunteers, partners, and random kindness by strangers and by passers, our event was a success. People – their rights – but also their light and kindness, is what our festival is all about. And there are more of them around us every day. That is why we will prevail”, says Polina Andrianova, one of the festival organizers.

The organizers thank all partners, friends, volunteers, colleagues, participants, as well as the police and the ombudsman, for today’s support.