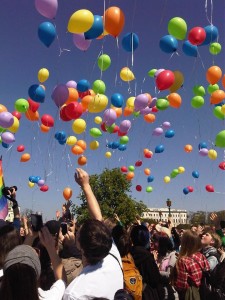 Today’s IDAHOT “Rainbow flashmob” rally on Marsovo Pole, St. Peterburg’s city center, looked more like a celebration than in the years prior. Around 200 people came with plackards about peace, love, diversity and tolerance. Surrounded by around 200 armored policemen, they celebrated the day when homosexuality was excluded from the list of mental disorders by the World Health Association. After short speeches by the organizers and members of human rights community, rainbow balloons were released into the unusually bright and shiny St. Petersburg sky.“Thanks to the continued solidarity and collaboration within LGBT groups and wider human rights community, and to the ombudsman and the police talking to each other and doing their job well, this time around we had peace at the rally. The real celebration will come, though, when an army of armored policemen will not be needed to surround a group of LGBT who want to speak about love and peace,” says Polina Andrianova, “Coming Out” activist.Not everything was rainbow for LGBT activists today. Fearing to come to the rally and face the police, members of right extreme groups attacked the bus taking participants from the rally with stones while it was stopped at a traffic light. The windows did not break and no one was hurt. There are other reports of attacks on participants in the subway. As one of participants put it, “coming to an LGBT action always sobers you up to the realities of our life in Russia today.”

Photos from the action here:
http://www.comingoutspb.ru/en/en-news/rainbow_flashmob_17_05_2014

We thank our partners – the Russian LGBT Network, Alliance of Straights for LGBT Equality, Side by Side LGBT film festival, “Solidarnost'”, other human rights groups and independent LGBT activists – for informational and organizational support.