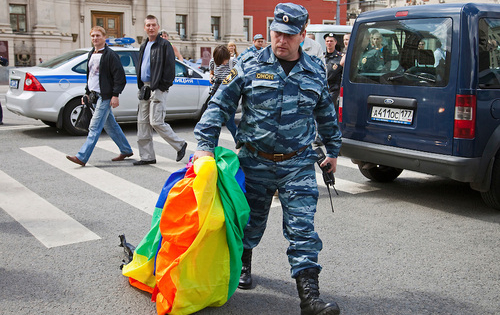 Today, LGBT organization Coming Out defended itself against prosecutor’s allegations that it is a “foreign agent.” For 4 hours the judge listened to both parties’ arguments , before postponing the trial. Prosecutor insisted that publishing a brochure “Discrimination of LGBT: What, How, and Why?” and participation in a campaign against adoption of the federal “propaganda” law were “political activity”. Coming Out’s lawyers Dmitry Bartenev and Sergei Golubok drew the court’s attention to the unlawful nature of the prosecutor’s checks, legal ambiguity of the “foreign agents” law, and the difference between human rights and political activity.

To begin, the lawyers pointed out that prosecutor’s audits of the organization were unlawful, as no grounds for these checks were ever presented. In auditing the 40 NGOs of St. Petersburg, and hundreds of NGOs all over Russia, prosecutors in effect embarked on a “witch-hunt.” To the court, this argument was irrelevant. “If no violation occurred you wouldn’t be here,” remarked the judge, with that toppling the idea of the presumption of innocence.

Lawyers’ second argument, pertaining to the fact that terminology used in the law – “political activity” – is legally vague and uncertain, and the law’s compliance with the RF Constitution needs to be verified, was also dismissed, as the prosecutor found this request to unnecessarily prolong the trial.

Coming Out’s main argument remained that human rights activity cannot be equated to political activity. Moreover, even if the court found protection of rights of minorities to be political activity, it would remain unclear what kind of state policy the organization is accused of trying to change. “Where is it written that homophobia and discrimination of LGBT constitutes Russia’s state policy?” – asked Coming Out’s lawyer, Sergei Golubok. No answer to that was given.

At the end, the lawyers were able to get the trial postponed, with next trial date set for June 11, 10 am.

Thank you for following the proceedings, and we will keep you updated.

The Coming Out team